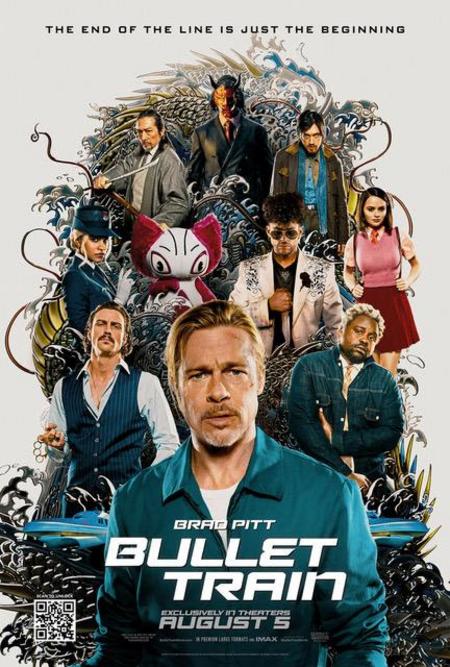 As we hit the end of the summer, we are quick to realize that the time of summer Blockbuster movies is not quite over yet. A film that reminds us of that more than any other this late in the summer is Brad Pitt’s new action extravaganza Bullet Train. If you needed a solid reminder of what fun, it can be to go to the movies then you really need to look no further than this action-packed ride. So, all aboard the Bullet Train for one last good time before the summer draws toa close.

Bullet Train centers around Lady Bug (Brad Pitt) an assassin who is getting back in the game after a brief hiatus. The job is simple. Get on the train, grab a briefcase, and get off at the next stop. Simple right? Well, as Lady Bug soon realizes nothing is ever this easy, because he is on this train with none other that 4 assassins each with their own missions and of course, as luck would have it, all of their jobs are connected. With hat many professional hired guns in one place, this ride will be anything but easy.

I can’t even begin to tell you how much fun I had at this movie. From the kick-ass direction from David Leitch (Atomic Blonde, Deadpool 2) to the cinematography, to the unbelievable soundtrack this movie has it all. The story is full of twists and turns and the way this film is put together and laid out for the viewer it keeps you completely engaged. Everything about this movie just feels cool as hell. The comedic timing of the actors and the twists and turns of the insane story make for a truly enjoyable summer film. If you enjoyed David Leitch’s previous works, then this one will be more than a little up your alley. If Atomic Blonde and Deadpool 2 got together and had a crazy action filled hilarious baby, then you would get Bullet Train. Honestly while watching this, I almost felt a little bit like I was watching a Guy Ritchie flick or even something by Tarantino. It emanates Kill Bill and Snatch vibes. Such a great combination. It just works. That paired with the music in the movie really pulls you into the ride.

Aside from the top notch directing you have to give it up for the cast. Brad Pitt back in a lead role is fantastic. He is charming, witty, and his assassin on a spiritual journey for peace is more than amusing. His grounded and spiritual point of view is fun in comparison to his murderous counter parts. Tangerine (Aaron Taylor-Johnson) and Lemon (Brian Tyree Henry) who play a pair of assassin twins by far steal the show for me. They are as funny as they are deadly in this movie. From Lemon constantly comparing people to character from Thomas the Train to Tangerine just trying to keep the mission from imploding these guys really bring a lot to this film and they look cool while doing it. Joey King is a surprising delight in the film and can really play up the unsuspecting innocent young girl role to a tee. Bad bunny taking on the role of Wolf, a cartel killer is well done and brings the rage when he is on screen. Now, if you are like me, you may not realize the parade of characters that you will encounter on the bullet train. There are some seriously fantastic cameos throughout the movie that will have you saying “OMG!’ but I will leave it at that to not ruin them for you.

Overall, I cannot say enough good things about this flick. It is everything you want for a trip to the movies. It has action, comedy, a wild story, an engaging cast, and killer direction. This movie is the type of film that makes going to the movies worth it. I would recommend IMAX for this one. Also don’t jump up the second the credits start since there is a small clip you will miss just a couple minutes into the credits that is worth the wait. So, put Bullet Train on your calendar and do not miss this extremely fun and entertaining movie. See it on the big screen as it was intended to be.