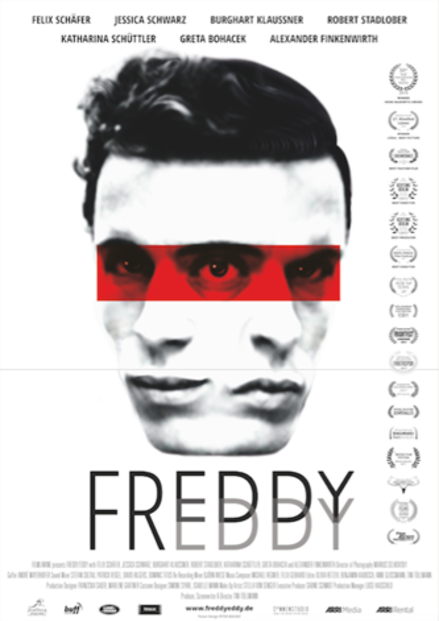 If psychological thrillers are your thing then you will need to look no further than the twisted new film Freddy/Eddy. This German film was submitted to this years Austin Film Festival and it quickly became easy to see why it was accepted. The movie stars Felix Schafer as Freddy a guy who is going through a rough patch. His wife is divorcing him and taking custody of their son after Freddy found out she was cheating on him and allegedly assaulted her and her lover. The problem is that Freddy swears he is innocent despite eyewitnesses he has no recollection of committing this horrible crime. He seems like a very mild mannered put together guy. As the film progresses we learn Freddy used to see an imaginary friend/alter ego of his he calls Eddy. Freddy starts to claim it is Eddy who is causing all the evil and turmoil in his life. As the incidents escalate if Freddy can't get ahold of Eddy who knows what will become of him.

This movie is dark and twisted, but it is pretty damn awesome. I will admit I thought I knew where the plot was taking me, but I was completely wrong. This film throws some pretty epic curve balls your way right when you think you have a handle on it. It very much puts you in the place of Freddy trying to grasp what is real and what is not. Felix Schafer does a great job as Freddy/Eddy in this movie, especially considering this is only his second film and he takes on a leading role. Tini Tullmann has really made some wise choices with this movie. It keeps you pulled in right from the beginning and I can't say enough good things about it. It is hard to get too deep into the hows and why without giving too much away because you need to see this one, with a fresh set of eyes.

We scored Freddy/Eddy with a solid A-. The cast and crew really have brought a fun thriller to the table with Freddy/Eddy. Don't let the subtitles make you shy away from this movie, it is worth a watch.