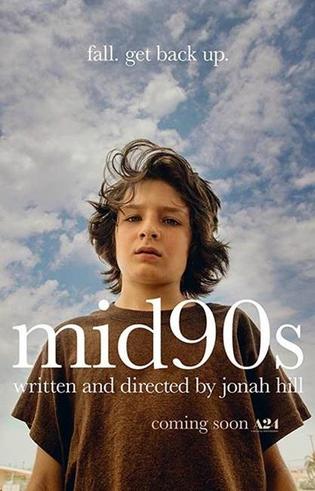 With so many of us having grown up in the 90's it is easy to see why Jonah Hill's new film Mid 90's is going to resonate with a lot of people. I myself was a teenager in the 90's and I feel like I knew every single character in this film in some capacity in my teens. Jonah Hill has written and directed this film and he does a fantastic job giving us a look back at a small fragment of time many of us know so well. The film centers around Stevie (Sunny Suljic) a young boy who is just now coming of age and is longing for someplace to fit in. He is being raised by a single mom (Katherine Waterson) who seems more focused on her dating life than on the daily life of her two sons. Stevie's older brother Ian is also a nightmare for him to live with and who is a constant source of getting beat up by, but despite all that at the beginning of this film, he idolizes him. One day when he is out walking around town he stumbles across a group of skater kids and it is there that he starts to build friendships and find his tribe. From getting his first smoke to his first kiss to learning how to skate, it is with these kids that Stevie really comes into his own in the coming of age tale.

The movie itself will fly by as your watch it. Clocking in at an hour and twenty-four minutes. Despite the short run-time, it is still a perfectly timed and entertaining film. It is easy to fall and grown up right alongside Stevie as he learns what it means to be one of the cool kids. We all remember that time when we were coming into our own and the importance of having a good group of friends to help you through it. This film shows that perfectly. Where Stevie's brother falls short of being his role model Na-Kel Smith who plays Ray steps up and fills those shoes, advising him and helping him when he is at his lowest. Ray is the leader of this little pack of misfits and is the one with the most potential to be something. His other friends Fuckshit (Olan Prenatt), Fourth Grade (Ryder McLaughlin) and Ruben (Gio Galicia) are the usual sources for bad decisions in the group and yes we all knew these types of guys.

For me, looking back on this film, it reminds me of a modern-day version of The Sandlot, well, maybe if the movie KIDS and The Sandlot got together and had a love child, then you get Mid 90's. While it lacks the wholesome nature of The Sandlot, the film has the same overall story. Nerdy kid grows up and finds a new group of friends who except him and teach him about life and the true meaning of friendship. They play their favorite sports together (baseball for The Sandlot and Skateboarding for Mid 90's). Everyone has a nickname of some sort. The main character's home life is not what the particularly want (In The Sandlot the kid is living with his mom and Stepdad who he can't quite connect to our really get any attention from and in Mid 90's Stevie is fatherless also and can't quite get the attention of his mom or live up to his brother's standards). While the movie misses that wholesome vibe that The Sandlot gives off, this is where the film KIDS steps in and take over. Mid 90's has that same raw and real feeling as KIDS did. It at times can seem like these kids are everything society labels them as, but when you take a closer look you see that they are more than just some burnouts with skateboards. Each of these kids home life is not perfect, so they build a family of their own in each other as a method of coping and escaping. We learn that part of Steve's brother's issues is not being able to find what Stevie has in this group of guys. Ian's much angrier than Stevie and he is definitely jealous of him in many ways. He is angry that the person their mother is now, is not the mom he was raised by since she is far more attentive to Stevie than she ever was with him. He finds solace in solitude and takes out his aggression on Stevie.

Much like the movie KIDs, we get an inside look at the partying life these kids go through. They drink 40's like they are water, smoke, pop pills, and do everything they can to hook up. We see Stevie get his first experience with a girl and then heard the gory details after as he brags to his friends. You see these kids who are not thinking past the next few minutes of their life and are not worried about the consequences of their actions. It feels very familiar, especially if you hung around people like this growing up. Jonah Hill really nails the feel of the time. As his full-length feature directorial debut, he has done an incredible job with this movie.

Overall, this movie was really well done. I enjoyed the movie. It flies by but it definitely resonated with me in many ways and I feel like it will do the same for you. We scored Mid 90's with an A. This is a solid film that is well was written and entertaining to see. So get to the theater and follow Stevie on his journey and take a trip down memory lane back to the 90's with Mid 90's.