I have to say that I love the emergence of web series. There are plenty of weeks that I spend more time on my computer that I do in front of my TV so getting quality content that I can watch there is beyond needed. One of the latest to hit this year's Austin Film Festival is the crazy series Rocketmen. The film by Webster Crowell takes us to the rooftops of America where our fearless heroes watch over the city. Now you may be imagining something very heroic right now, but maybe hold off before you get any preconceived ideas about the Rocketmen. The group was formed back when President Roosevelt was putting together and pushing job programs and one those programs was the Rocketmen. They were put into place to protect America from future evils...like atomic strikes, communism, and robots. Yes, I said robots.  After years of being a super secret group, they were actually forgotten about for the most part since no one really is sure who runs them. So left to their own devices they have become lazy, bored, and severely underpaid (can we say no pay increases since they were formed? Back in the day minimum wage is not ideal for modern day standards). Screwing off and hanging out becomes their new norm, until one day a tragic accident happens and sets off a series of unfortunate events that will bring the Rocketmen back to the light of day.

This series is over the top nutty. As long as you are prepared to strap yourself into a show that doesn't take itself seriously at all then it will be smooth sailing. We got a chance to check out the first few episodes and it is light-hearted and fun to watch. The hokeyness of the show just adds to its overall charm and watchability. You can expect silly special effects and stop-motion that is so fitting with the story. The cast is filled with fresh faces, with a few notables sprinkled into side parts which are fun to see. Episodes are super short (I think the longest one was about 12 minutes) so you can binge this series in a couple hours once the final episodes get released.

I really hope this show gets the green light to finish this series because I can't wait to see how this one ends.

You can check out screenings of Rocketmen episodes 1-3 October 29th at 6 pm and November 1 at 1 pm at the Austin Film Festival. 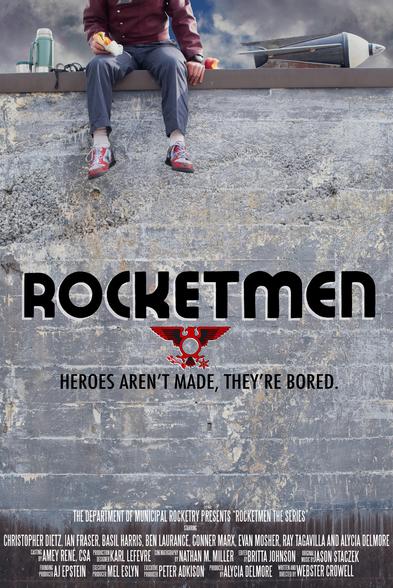