Horror movie season is easily one of my favorite times of the year. So anytime there is a new horroresque flick you can count me in. Austin Film Festival 2017 brought us a new late night horror film to the table with the film Ruin Me.  The film centers around Alexandra and woman who agrees to attend a horror film themed camp called Slasher Sleepout. If you are not familiar with these, think haunted houses, but out in the woods and being totally exposed the entire night. Despite not being a horror movie fan she reluctantly agrees to join her boyfriend on this trip and really tries to do her part to participate and help her group survive the experience. Things seem to be moving right along according to plan when one by one someone starts picking off campers and Alex quickly realizes she is going to have to really fight for her life if she wants to make it back alive.

This was a fun movie and like most horror films had a little bit of cheesiness to it. For example, the other campers were pretty amusing. Aside from Alex's boyfriend Nathan. we had a goth couple who are horror obsessed, and an uber horror film buff and a mysterious loner.  The story itself feels like its going to be predictable, but there were definitely a few surprises that I didn't see coming which kept this film feeling fun and new. I wish a few of these had been more deeply built up because they take you by surprise and force you to quickly catch up with the story. I won't give any of that away because I definitely do not want to spoil anything for you.  The fresh faces of the cast really did a good job bringing this to life. Marcienne Dwyer as Alex and Matt Dellapina as her boyfriend Nathan were great. Plus this film got some really great buzz while at the festival as the midnite movies usually do.

Overall we really enjoyed watching this one. It wasn't overly gory and kept just enough level of campiness to stay fun and light. It had plenty of good twists and turns and unexpected plot twists. Overall, we score Ruin Me with a B+. It was a fun film we hope gets a wide release soon! Horror buffs keep your eyes peeled for Ruin Me! 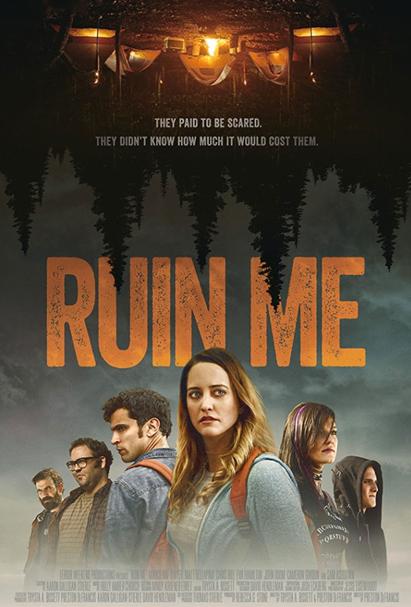