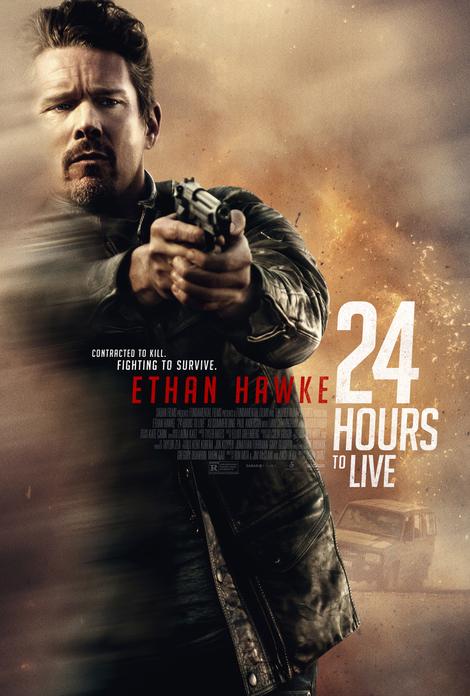 24 Hours to live has been described as Ethan Hawke's John Wick. We got the chance to check this one out at the Austin Film Festival 2017 and we are here to weigh in on Hawke's latest action flick. The movie centers around Ethan Hawk who plays assassin for hire, Travis Conrad. He has recently taken himself out of the game after the death of his wife and child. When his former agency calls him out of hiatus to kill a man who could blow the cover on a government conspiracy and the Interpol agent who is protecting him the offer they make him is too good to refuse. Things work almost according to plan when at the last moment he has a change of heart and can't follow through and is shot and killed. This seems like the end of the story but his agency has been testing an experimental treatment that will keep him alive.....but only for 24 hours. With the time ticking away Travis must figure out a way to right the wrongs that have been done to him and shut down the men behind it.

This movie is a little bit John Wick, a little bit In Time, and a lot about a dozen other movies you may have already seen about assassins who have a change of heart about their line of work.  Hawke is okay in the role, but the story itself comes off as silly and sloppy at times. Hawke's employer Jim Morrow (Paul Anderson) have an understanding of their chosen professions and when they tables are forced to turn Paul is not afraid to pull the trigger to put down his longtime friend. Qing Xu as Lin, our Interpol agent, really does a great job but is given minimal screen time, and I feel like she could have brought a lot more to this film if given the chance. Ethan Hawke isn't quite the screen presence as Keanu Reeve's John Wick, but he somewhat reminds me of his character is Training Day. Maybe it is just that I don't really see him as our action hero. My favorite film with him is Gattaca. He can totally kill in sci-fi and even love stories like Before Sunset.  Game of Thrones fans will be excited to see Liam Cunningham as Wetzler, our resident bad guy in this film as well. Again his role feels like it should have been expanded upon to give us more backstory for him, but it was kept to an unfortunate minimum.

Overall, I really just was hoping for this film to bring a little more to the table. It had the talent and looks like it had the budget to get it there, but the script seems to have fallen short of things that could truly have made this film excel to its full potential. There is definitely nothing against making a film longer to get the story just right, but when we are sacrificing the things that will be the heart and soul of your film to keep the run time down, why even bother? 24 Hours To Live comes off feeling rushed and just like a substitute for something we have seen before.  It could have given us so much more. We scored this film with a C+. Loved the cast, but they were definitely underutilized and a script that left a lot to be desired. This feels like a video on demand type film for us, but if you got the chance to check this one out we would lvoe to hear your thoughts. Comment below for your review on 24 Hours To Live!