Where The Crawdads Sing Review 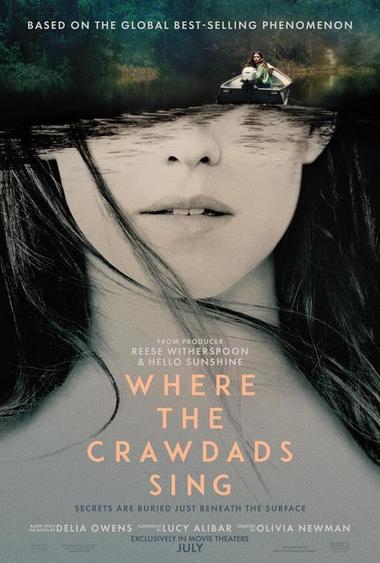 The long-awaited film adaptation of the book by Delia Owens has finally arrived. Where The Crawdads Sing hits theaters everywhere July 15th and we were lucky enough to score a chance to check out an early screening and are here to give you our take on this film. Now I do have to preface this with saying I have not read this book yet, so I was heading into this film not knowing exactly what to expect. So, all aboard the hype train as it leaves the station. Let’s see if this one was worth the cost of admission.

So, to start off, for those of you who are unfamiliar with this story. Everything centers around Kya (Daisy Edgar-Jones). She is a young woman who lives alone in the marsh, secluded away from most people in her town. She keeps to herself and really doesn’t bother anyone. She was raised by an alcoholic father who after years of abuse managed to run off his wife and other children, leaving Kya (the youngest) alone with her father. She learned to fend for herself from a young age and when her father passes away, she truly is all alone in the marsh.  Helped by a couple that runs a small grocery store and gas stop on the water, Kya learns to make a quiet life for herself. That is until she meets Tate (Taylor John Smith) a young man who takes Kya under his wing and helps teach her to read, write, and opens her eyes to the world of biology, how things work and even love. When Tate is forced to leave Kya years later to go to college Kya meets another boy while running to the store. This man goes by the name of Chase Andrews and from the second he meets Kya he is infatuated by her. The two have a troubled relationship, to say the least. Kya stays in the relationship with Chase to avoid the loneliness of the marsh when one day a couple of boys find Chase’s body in the marsh. From the view of the town the only person they can think of who would ever hurt Chase is Kya and now she must face a court full of people who mock and despise her to prove her innocence or face the death penalty for killing Chase.

This story will take you on a whole roller coaster of emotions. You will laugh, you may cry, you will feel anger, and sadness throughout this film. Daisy Edgar-Jones is incredible in this film. Anyone who saw her performance in Under The Banner Of Heaven should know this girl is great on screen. She fits Kya perfectly and really brings this role home. Taylor John Smith is also delightful as Tate. He brings so much expression and depth to his character. You can see so much emotion on his face from uncertainty to pain to complete adoration. Harris Dickinson as Chase Andrews also kills it. He easily climbs the ranks of actors who are so good at what they do you just hate their character. Seriously, Chase sucks. I said it. I mean it and Harris acts his ass off portraying that to a “T”.

This story builds slowly, and I love that it does that because it really gives you time to feel for these characters and get to know them. When start the movie with the discovery of Chase’s body and then the rest of the film is told mostly in flashbacks which work great catching the viewers up with who is who and why we should care about them. The story has a lot of twists and turns and will keep you guessing right up until the very last minute. When I say that I heard several people’s audible reactions to scenes throughout the movie I am not joking. I may have been included in some of them. That is how you know you have an audience completely engulfed in the story you are telling on the screen. Where The Crawdads Sing gets a solid A rating from me. As audiences find there way back into the theaters, they should definitely find time for this film in their weekend plans. It is a nice deviation from the over-the-top summer blockbusters we are used to seeing at this time of year and it is one hell of a story. So do yourself a favor and check out Where The Crawdads Sing in theaters everywhere July 15. Now if you will excuse me, I am heading to the bookstore to buy a copy of this book because I just gotta know how it compares to the film.