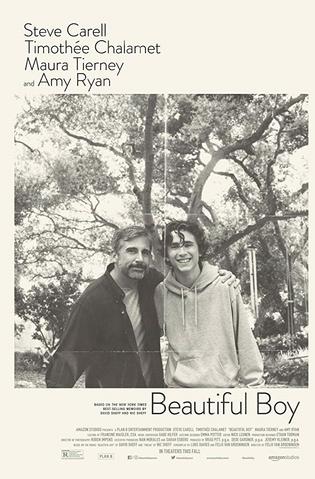 Dealing with addiction is never an easy thing and I can only imagine how incredibly hard it would be to watch your child struggle with it and have to worry if they are going to come out of it alive or not on the other end. There are few films that portray this better than Beautiful Boy starring Steve Carell and Timothee Chalamet. The movie is based on a true story and follows David (Carell) and Nic (Chalamet), Sheff as they navigate Nic's incredibly hard battle with addiction and show the intense stress that this puts on a family.

The movie really does a fantastic job bring real emotion and life to these characters. When we look at Nic and we start to see his story unfold and his slow slip into the world of drug abuse and how despite his need for these drugs to just feel okay, he hates himself for needing them at the same time. What better actor to take on the role that Chalamet. He is so good in this film. He is essentially the wreck you can't look away from. On the flip side of that, we have his father David who will literally go to any length to help his son, even if that means spending hours driving around the streets or finally reaching a point where he realizes he needs to let go and let life run its course for better or worse. These two actors work so well together and bring such emotion to the movie. I also can't leave out Maura Tierney who plays David's wife Karen and Nic's mom Vicki played by Amy Ryan. Both of these ladies give one hell of a performance in the film. Maura who is having to be strong and supportive with David as he chases his son all over the city while raising their two youngest children. She tries to be understanding and you can see it in her eyes the weight the situation is having on their own family. Amy Ryan steps in when Nic decides that the best thing for him will be moving in with his mom since he dad isn't giving in to his needs and despite the change of scenery, old habits die hard, but she stands her ground as any mother would.

This story is far from an upbeat one, but I feel like this is a really important one to see. Especially if you have gone through or know of people who have had a loved one who suffers from problems from substance abuse.  It is not an easy road for anyone to go down no matter which side of it you fall on, the addict or the ally, but this movie pulls back the curtain and shows us a lot of the raw struggle mostly from the side of the family which I feel doesn't always get the screen time it deserves in movies like this. Much of the film is shown in flashbacks and a father watches his perfect beautiful son grow into a man he doesn't even know anymore. The disconnect and reconnect are what make this film. Love is what holds it all together.

Overall, this film scored an easy A+ from us. It is emotional and hard to watch at times, but the ride if a good one and like our characters in the movie, it is worth the trip to make it out on the other end for better or worse. So if I were you I would not overlook the fantastic performances and a great story that makes up Beautiful Boy.