Think about the toughest time of your life, when things seemed the most hopeless. What would you do to get yourself back on your feet? For the couple in the new film Bodies, they are willing to do just about anything, including subjecting themselves to a mysterious experiment they know nothing about. All they do know is that if they complete the entire program they will receive $75,000, but if they fail even one challenge they will leave with nothing. With the threat of losing everything they own bearing down on them, they decide the mystery is worth the risk.

The film stars Joseph Baker Lisa Ronaghan Chloe Massey and Paul Hurstfield and is making its world premiere at the 2017 Austin Film Festival. We got the chance to check out the movie and were pleasantly surprised. This film is definitely one of the types that will make you question a lot of things, including what you would do if you were in the same spot as our couple in the film. Would you wager your safety or the safety of your loved one for someone else, a stranger? Whose life has more value your pet or your spouse? Lots of things that will give you pause and really test your moral fiber.

I do have to admit, much like most films that I see like this, there are characters that drive me absolutely crackers. Whether it is their inability to act or their need to be dragged through every obstacle, you will definitely find a couple characters that are obviously better humans than me and who are willing to question every step of the process they signed up for. It is both necessary and stressful to watch.

Overall I liked the strange concept of this film and the unexpected plot twists throughout the film. it was definitely refreshing to see. If you are a fan of indie horror/thriller films, this one should be right up your alley. Director Tom Large gives us a solid movie that will keep you guessing from start to finish. We scored Bodies with a solid  B. It was refreshing and unexpected and we enjoyed getting the chance to check it out.  Keep your eyes peeled for hopefully, a large release in the future. 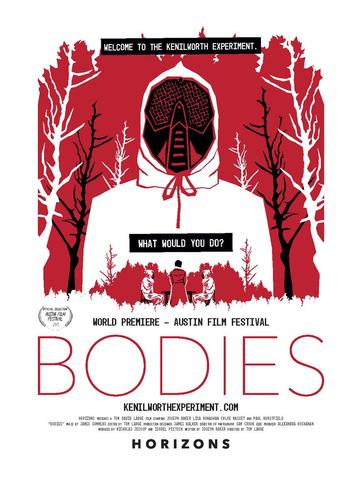