Well, the moment we have all been waiting for has finally arrived with the release of the highly anticipated Queen biopic Bohemian Rhapsody. So now just one question remains, was it worth the wait? Well, in my honest opinion, abso-freakin-lutely! This incredible story takes us on the journey of one of the most iconic rock bands of all time and gives us a look at not only the birth and life of the band but a peek behind the curtain into the life of one of music's biggest legends and Queen frontman, Freddie Mercury. From their humble beginnings playing college shows to their historic performance at 1985's Live Aid concert, Bohemian Rhapsody will take you on one hell of a rock n' roll ride.

Rami Malek takes on the role of Freddie Mercury with all the charm and swagger that the real man gave off. Never one to be ignored or denied Malek's Mercury is cocky and charming and just captivating to watch. Even through Freddie's highest highs and lowest lows he gives a fantastic performance. Many were worried that with the departure of Sacha Baron Cohen who was originally slated to play a much wilder and dark Mercury, that the film would gloss over Freddie's personal life, but honestly what we get from Malek's version of the film just feels tasteful and right. You don't need to see the binge drinking, drug use, and copious amounts of random sex to know that Freddie used all those things to fill a void in his own soul and it is heavily implied throughout the film without the audience having to attend every party. Instead, we get much more substance and story which just feels way more important. He is the happy-go-lucky frontman, one second and the tortured artist the next and Bohemian Rhapsody does a great job of making you really feel for this man and not just him, but the people around him whom his actions effect. You get a bit of an inside look at his relationship with Mary Austin played by Lucy Boyton (Sing Street). Their romance/friendship is both sweet and heartbreaking to see. I know many were worried this film would downplay his sexuality and instead focus on his relationship with Mary, and while the film does focus on this relationship with her, it definitely does not leave out his sexual exploits with men and his eventual relationship with Jim Hutton (Aaron McCusker).

While many would like the sole focus of this film to be Freddie Mercury you can't leave out the rest of the band because, let's face it, with them there is no Queen.  Freddie's bandmates bring a lot to this picture from the sarcastic and at times confrontational Roger Taylor (Ben Hardy) to the band's voice of reason Brian May ( Gwilym Lee) to the quiet talent of John Deacon (Joseph Mazzello). These guys bring a lot to the table as Freddie's family, friends, and biggest support system. Despite all the over the top requests and ideas of their lead singer, these guys jump in with both feet to fuel the fire and bring us some of the greatest music rock has ever seen. It is pretty awesome to watch on the big screen.

Overall, I scored Bohemian Rhapsody with a solid A. This is an entertaining, fun, funny, and at times the heartbreaking film that definitely deserves your attention. Fans of Queen should breathe a sigh of relief because this is a solid movie. So head to the box office and buckle up for one hell of a ride with this rock royalty and allow yourself to be taken away and inspired with Bohemian Rhapsody. 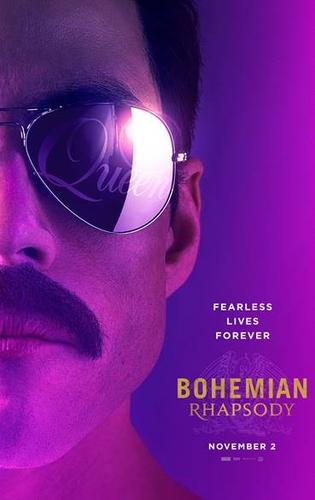