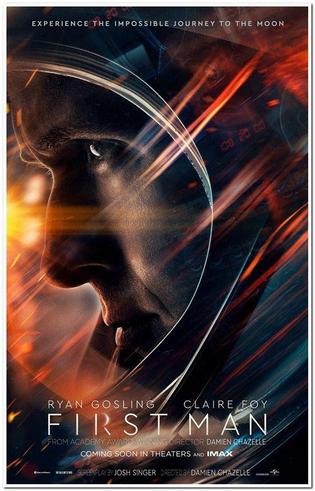 We are definitely heading straight into Oscar season as more and more films hit the box office with the hopes of bringing home one of the iconic golden statues and First Man is no exception. Ryan Gosling is taking on the role of famed astronaut Neil Armstrong in the biopic about his rise in the space program to becoming the first man to walk on the moon. So the real question in the highly competitive award season is does First Man live up to the hype? Well, let's break this one down.

After watching this film and spending the night really thinking about it I have come to the conclusion that this should not be the film taking home all the big prizes at this year's Oscars. Not to say there aren't a few categories that this film does right, so maybe we should start with those. You can tell that this film is going for the gold with their use of cinematography. There are several sweeping shots that are amazing and breathtaking. When things are going sideways on some of these flights the film is shot to put you right there in the cockpit with the pilots and crew and they can be pretty intense and if nothing else a little motion sickness inducing. Much of the film is shot this way which I suppose is supposed to make us feel more like part of the story, and for some parts it does, but for me, it seemed to take away from the film at times.

The other thing the movie does well is with its choice of casting. Ryan Gosling does a great job as Neil Armstrong, who you have to remember, was not exactly Mr. Personality in the spotlight. He was a shy guy, who did not really care much for gloating about his time on the moon or in space. He got his job done to the best of his ability and when he wasn't working just wanted to live a quiet life. Gosling portrays him very well. You can see a lot of the burden he carries after the death of his young daughter and how much the success of the missions mean to him after the loss of several of his friends. He is a strong, focused, force of nature in the film. His co-stars like Claire Foy and Jason Clarke also do a solid job in this movie, but at times it feels like they were slightly underused in the story. Their acting chops could have brought a lot more to the film than what we are allowed to see with the finished product of First Man, which is kind of a shame.

Now let's get to the main problem that I have with this film and that is the flow of the story. This movie has some really great moments, but that is all they are brief moments of great shots in between these long drawn out scenes which after a while can feel a bit unnecessary. You really will begin to feel every minute of that two hours and twenty-one-minute timing of the movie. it really just drags. The other main issue with this story unlike some other films like Apollo 13 and things like that is that the way the story is put together you never really feel a great sense of connectedness with the characters. For example, you can tell Neil just kind of checks out of his family life after the death of his daughter and plunges himself into work to avoid dealing with his pain, and his wife (Foy) is left to hold his home life together. We could have explored possibly more of that or at least got to see more of their scenes together to really get a sense of what they were dealing with as a couple, but aside from when She tells him to talk to his sons about how he may never come back from his moon mission we see nothing of the sort. The disconnect is the biggest killer of this film. Maybe you will see it and feel differently, who knows, but the more time I put between myself and actually watching the movie the less I cared for it.

So with all of that, we had to give First Man a B- overall. It could have used possibly a better screenwriter or director because sadly Damien Chazelle (La La Land director) did not strike lightening this time around for me. Another thing I need to touch on because I have seen several people comment about not wanting to see this film because they cut out the flag scene on the moon. That is just silly because while we don't see him put the flag in the ground the flag is very much on the moon and the other thing he does leave there feels like it has a much bigger impact on the overall story. There is no shortage of patriotism in this movie. So with that, I am going to leave you to decide if you want to boldly go into space with the man that made our trip to the moon possible.