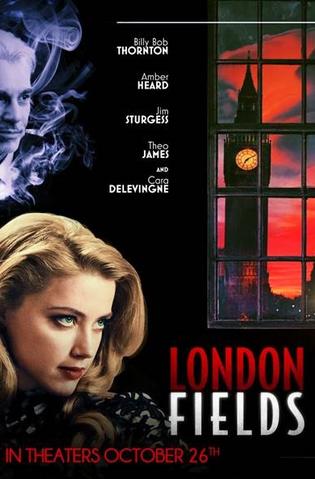 If you are in the market for something a little left of center at the box office this weekend London Fields may just be the film for you. The film packs a surprising cast by bringing in Billy Bob Thorton, Amber Heard, Theo James, Jim Sturgess, and even having Johnny Depp making an appearance. The story can get a little confusing at times, but here is the gist of it. Failed writer Samson heads to London to write his next great novel before he dies. While he is there he encounters 3 different characters. The first is Keith Talent (Sturgess) a low life handyman and darts player who is in dire need of a toothbrush, Guy Clinch (James) who is a well to do businessman who is someone hanging out with Keith, and lastly and more importantly Nicola Six (Heard) who is is a clairvoyant Femme Fatale who walks into the bar that these three gentlemen are residing in. Nicola has the ability to see things before they happen and just so happens to have seen her own death and when she enters the bar she knows that between these three gentlemen, Samson, Keith, & Guy, one of them will be her murderer. The problem is she is not clear on which one. The plot thickens when Samson discovers her secret and wants to make her story the subject of his book. Nicola agrees to let him in on her life for the story since her time is drawing close. As the story unfolds we watch Nicola begin a long triangle between our three gents and nothing good can come from that.

I wasn't sure what to make of this film the first time I viewed it. The second time around things got much more clear, so maybe a third watch with bring things into focus but here is what I know based on what I have seen. This movie could use a bit more tweaking. My problems with this stem from the scrip of the film. While I like the concept of the movie, but the film doesn't do a great job of laying out the motivation of Nicola. It almost seems like she is creating a self-fulfilling prophecy by creating tension between these three guys and I am not entirely sure why. Maybe her story would have had a different ending if she would just leave well enough alone, but then again, I guess who wouldn't have much in the way of a story. Jim Sturgess character was probably the thing that kept throwing me off the most. Like you have scummy bad guys and then you have Keith who is a grade A mouth breather who thinks he is one hell of a ladies man (spoiler alert: he is just like every other creepy dude you have ever seen in the bar). He dresses bad, he looks like he desperately needs a shower, and his crude demeanor is so over the top that it just needs work. His character feels out of place even in the dive bar these three find themselves in. Amber Heard's character Nicole needs a bit of work itself. Again the concept of her story is intriguing, but there are some things that she does during the film that feels weirdly out of place. The over the top seduction of these guys and the way she only seems to own underwear to wear just feel silly after a bit. This had the makings of a really solid film but falls short of the mark.

One of the things that I did catch the second time around and maybe I am just reaching here, was the religious connections to the characters. This may be a spoiler for some people, so if that bothers you, stop reading now. There is a brief point in the movie that you hear Samson writing about how Nicola once slept with God, just once and then never again. God was so brokenhearted he had two people write her love poems and what not and in response, she slept with the devil to hurt God. Later in the film, Samson is looking around the apartment she is staying in which belongs to a wealthy and successful crime fiction writer. In one of the books that were left for him, we find a note inside that was left by Nicola. He also finds photos and a mask she wore when this author and she slept together and of course, the mask is a devil mask. Samson's character feels like the most innocent person in the film, just wanting to watch over Nicola and observe her actions. A little bit God-like since he is recording her story to immortalize it forever in his book. You have him watching these two guys fall over themselves to impress her and she just plays them both like a fiddle. When Samson and Nicola do finally hook up one evening it starts to make sense. Samson is God, Keith & Guy are the two idiots who are sent to sway Nicola one way or another and the final nail in the coffin is "God" seeing her having sex with the "devil" in the photos that were left behind. That felt like a cool twist that I did not expect to enjoy with this movie.

Overall, this was a C grade movie for us. It is not the best thing at the box office, but it is also not the worst either. So if you are looking for a film to catch your eye at the box office this weekend, maybe take some time to check out London Fields. If you do we would love to hear your reviews in the comments below.