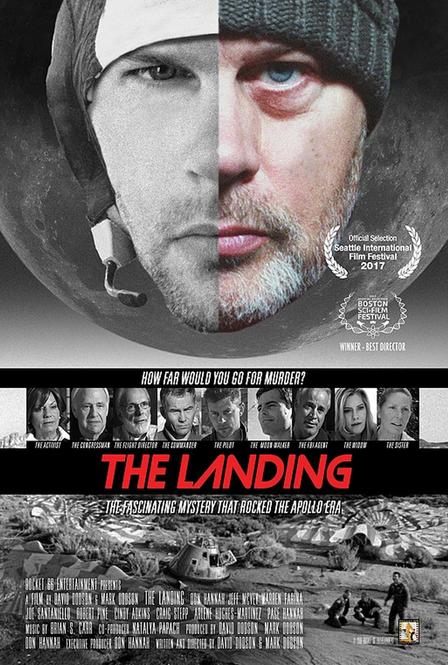 Space has always been seen as our final frontier and when NASA started sending US astronauts to the moon Americans had seen it as our greatest feat to date. Our trials into space were not always gloriously successful and when the NASA scratched Apollo missions 18-20 it seemed like the end of an era. This film, The Landing treats the canceled Apollo 18 mission as though it really took place. In the film the Apollo 18 crew was returning home from walking on the moon, they landed way off course in China and sadly two our own died, Al Borden and Ed Lovett,  before they could be rescued. The sole survivor was our missions pilot, Bo Cunningham. This unfortunate incident has been causing for much scrutiny and conspiracy theory for many years, which many thinking there is much more to this story than a couple astronauts dying in the desert. Could murder have taken place? The new film The Landing takes on the topic with a documentary-like film that was created over the course of 25 years. it uses a mix of original footage from the time plus recreated footage and actors to step into the roles of all the key players.

Director/writers David Dodson and Mark Dodson have really pieced together an interesting film here and it is one that is sure to give you pause to what may have actually happened with this incident.  The crew has been quoted saying:

"Presented as a documentary, the movie demonstrates how unsettlingly easy it is to reshape people's memories," said co-writer/directorsDavid Dodson and Mark Dodson, who explains that many viewers of the award-winning film were convinced it was a real documentary regarding actual historic events.  "It's one of the abiding themes of the project and particularly germane in today's cultural and political climate, amidst the whole 'fake news' and 'alternative facts' lunacy."

This film is definitely turning heads on the film festival scene. It comes in at just under an hour and a half, but the time spent watching it flies by because you are so pulled into the main material. If you aren't walking out of the theater after seeing this questioning everything you know about the space program and our government you must not have been paying attention to the film. It plays so real that I promise there will be people in there with you that think this really took place. it is nuts but totally amazing in the way it immerses you in the story.  That is why this was easily one of the best things to roll through the Austin Film Festival this year. it is unique and fresh, while also being a total stand-out film from the competition. The film is scoring awards all over the place that it is shown and we are still waiting for a wide-release date for this movie, but we can only hope it gets one soon because it would be nothing short of incredible to see what the general public nation-wide would do with a movie like this.


if you get the chance please check out The Landing. We scored this one with an A- and I promise this movie will make you question everything about "fake" and sensationalized news when you see just how real it can be. ​