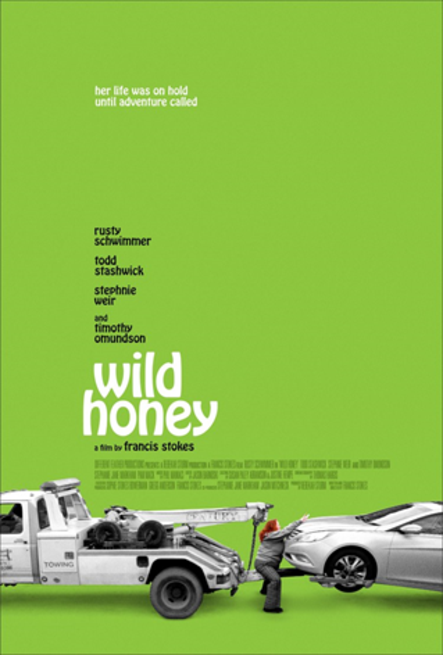 It is the time of year when cuddling up with someone you love and watching a feel-good movie is just what the doctor ordered and if that is something that sounds like a win to you then look no further than the new romantic comedy Wild Honey which had it's world premiere at this year's 2017 Austin Film Festival. This charming story is centered around Gabby (Rusty Schwimmer) a down on her luck middle-aged woman who is trying to make ends meet working as a phone sex operator. between financial troubles, a mess of an ex and loneliness she manages to find comfort in the company of one of her gentleman callers. On a whim, she decides to set off on an adventure to California to meet that man she feels could be the one for her. of course, like everything else, if Gabby's life nothing goes according to plan.

This movie really hit the spot for me. What was so nice about it was the realness you felt for these characters. Unlike most romantic films that sport leading actors that look like the stepped out of a swimsuit catalog, this movie gives us just a typical everyday woman to root for and it is great. Why shouldn't women of all ages and sizes be represented in Hollywood? it was beyond refreshing to see. They couldn't have picked a better actress taking on the role than Rusty Schwimmer. She is wonderful in the film. She is the type of actress that is relatable and funny. So much of this film gives viewers a chance to break out of the stereotypical "romantic comedy" roles we are so used to seeing. Despite the fact that throughout the first half of the movie she seems to be the character that is the biggest mess in the film as we watch her navigate this journey we start to realize that she is actually 100 times more put together than everyone else she meets in the film. She is confident and brave and while she may have lapses in judgment (because hey, nobody is perfect) she feels like she has a pretty solid set of self-confidence.

The story is enjoyable to watch, and while not perfect it is entertaining and thoughtful and fun. We can easily see why this film was chosen for the Austin Film Festival and can only hope it gets a wide release soon so that more audiences can have a chance to enjoy this. We scored Wild Honey with a solid A.  Keep your eyes peeled for  Wild Honey. You will not be disappointed.